In the hunter ring, the first thing to do is to memorize your first and last jumps. The goal of the course is an easy, flowing ride, so if you know where you start and where you stop you're off to a good start. I've also noticed that last jumps can be easily forgotten!

Look at the ground lines, look at how the arena is set up. It's very rare for an oxer to lead to a vertical, so you can pretty much bet that it's that outside vertical leading to the oxer. 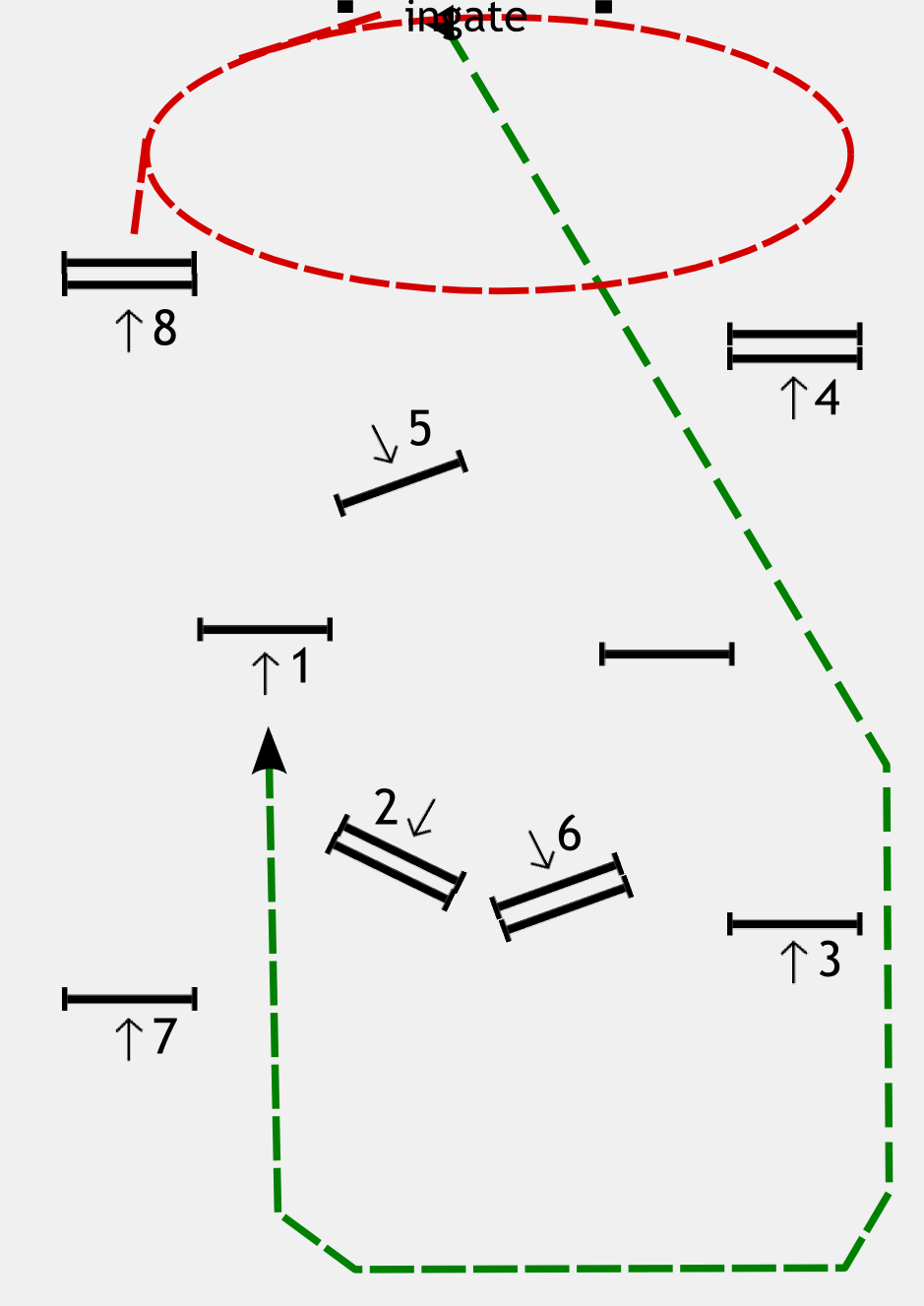 If I were memorizing this course, I'd look at the inside line... then tell myself it's inside, diagonal, outisde, diagonal, outside. Generally I'll name them a little bit. For example, inside purple, single diagonal, short outside, other diagonal, finish it outside. I develop a little bit of a chant. Then I draw the course while actually looking at the jumps, visualizing the route I'll take.

And then I'll walk over to the other side of the arena and draw the course again with my eyes and fingers, looking for visual cues as to where I want to make my turns, identifying things to keep my eyes on so I don't stare at the middle of the stupid jump.

So for this one I'd give #1 a silly name of some sort and create a chant like this: "Blue inside, then the single oxer diagonal, then outside line, then across the diagonal, then my other outside." Of course reciting this while looking at the actual jumps helps a lot - text can only convey so much.

Jumper courses get a lot more complex - the goal is to test the rider's planning, flexibility, and the rideability of the horse.

Using the same jump setup as above:

You can see there's a lot more twisty-ness to it. Now this chant in my mind is about finding the questions the course designer has posed me. So just looking at this, I'd think to myself, "one, break the line, rollback to two oxer, cut the loop on the end to approach the lonely oxer at a good angle, next is the outside vertical, then the diagonal oxer, approach the other outside vertical at a nice angle to get down the center of the arena to the single vertical, lots of half halts to prepare for a steep turn to the oxer, maintain the bend to the end vertical."

And then I'd draw it with my fingers, looking like an idiot as I point at jumps and stand on my tiptoes. Then I'll jog halfway around the arena and do it again. I don't generally remember the numbers of jumps because I'm an eventer and we don't do jumpoffs. So that's my bad.

Take a picture of the course design with your phone for reference when you're on the other side of the arena - nothing worse than realizing you've swapped 7 & 8 in your head and have no idea how you'd approach that question now.

Setting up my own courses has been the best educator in terms of teaching me how to memorize courses... I learn what it looks like on paper and what it takes to actually ride.

Chunking works well too - memorize the first four fences and then the next four, and just don't jump anything backwards.

Honestly there's as many ways to memorize a course as there are to build them, so this whole post is just to put some ideas in front of you, and perhaps take some of the edge off - hunter courses are the easiest thing on Earth in my opinion. As long as you know where to start and where to finish, you're golden. Diagonals almost always follow outside lines, so if you're cruising down from a vertical to an oxer you know you've just got to continue across the short side and then mosey down the diagonal.


Take a look at that video and see if you can parse out the course from the video. How would you memorize it? What would your internal dialogue be?
Posted by Kate at 12:00 PM