Life of a Groom

Yesterday (actually April 26 because this has been sitting in my drafts for a very long time) while chatting with the farrier about goodness-knows-what because that's what you do when the farrier is there, one of my working students had tacked Tango up for me and sort of hung around awkwardly waiting for me to take Tango up to school.

Tango started to dance and I think WS might have coughed or something to remind me that I had a horse waiting for me, and the farrier shared this story that just made me laugh:

"It's the life of a working student or a groom, you hurry up and you wait, you hurry up and you wait. You see the groom standing around falling asleep while the trainer is just talking to everyone, talking to everyone, and then you hear the trainer say, 'no, no, let me go get you some coffee!' and walk off. You see the groom start to sweat, thinking to himself, 'I was supposed to have about seventy horses tacked up ten minutes ago...' I've seen it a hundred times." 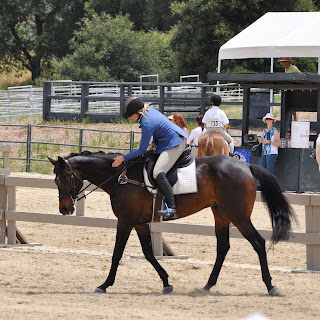 "Up, down, up, down" as a maintenance aid

These horses are saints. I am beyond lucky to know these horses and when I think about how many kids have benefited from these horses it is a bit overwhelming. But they're not dumb. They know when an educated butt is sitting on them and when it's a kid who knows nothing. (See also: my TB took off with a student and when I got on to school him, I loped him around like a western pleasure horse with no rein contact.)

I've begun to notice something interesting. As long as you're chanting "up, down, up, down," in a sing-songy but rhythmic voice, several of our horses will continue plugging along peacefully. The moment you stop, however, they'll break to the walk.

Somehow, inadvertently, we've trained these horses to assume "up, down, up, down" is their maintenance aid.
Posted by Kate at 9:00 AM 3 comments:

A whirlwind: and now it's summertime

I have so MANY things to recap, but I also want to get them out of the way so that I can write more in-depth posts about the things I've been learning.

So let's just go through a summary. 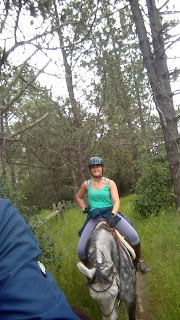 My sister came to visit and we had a grand time. I took her trail riding at Henry Cowell and Tango got to practice going up and down little steps.  What a goose. 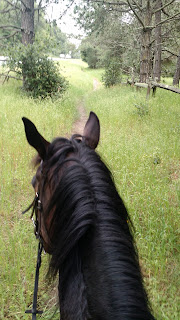 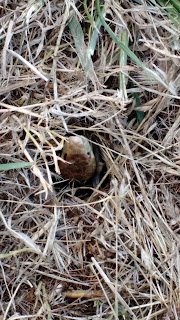 I took a bunch of students to Peppertree Ranch for a show and while the show itself went quite well, it was running extremely slowly because someone entered like nine horses the night before the show. We were at the showgrounds five hours longer than we anticipated. There was the above snake who kept popping his head out near my truck though. That was nifty. 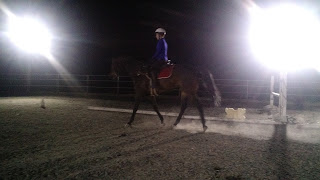 Jen from Cob Jockey came out to California for a work trip and I got to show her around the barn. What a funny, easy-to-talk-to, and thoughtful person! I really loved meeting her and find myself looking forward to the next visit! She also wrote this amazingly kind post about her visit that covers our brief adventure. 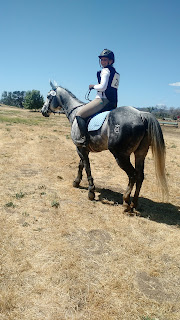 Chente finished his first one-day event with a student aboard. Dressage score of 40, no penalties in stadium, two refusals on cross-country. But he crossed the waters perfectly and was totally manageable out on course so I'm pretty stoked about that. 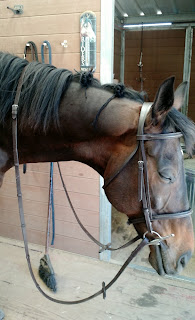 I attempted the dutch braids a la Guinness On Tap and it sort of worked. It was better when I tried again later. 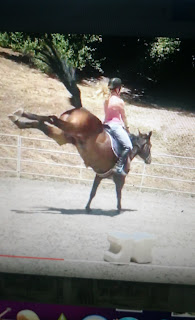 Amidst a really excellent schooling session I got this moment out of Tango, not minutes after discussing how if I want to sell him I should probably advertise him somewhere. It's a hilarious photo to me. 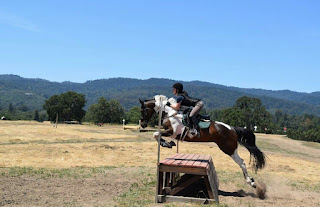 I took a couple of students to Woodside to school cross country and this photo of Kat and her lessee happened. Seriously I am in love with my horse and it kills me. 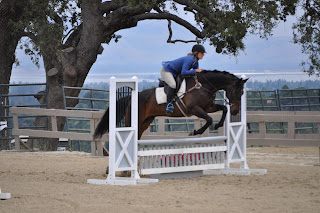 I took both Tango and Kat to a show with a bunch of other kids (Megan, I think you were there! Sorry to have missed you! I probably was no fun anyhow as I was busy herding cats kids around.)

It's weird to say this out loud: Tango was better than Kat. I enjoyed jumping Tango more than I enjoyed jumping Kat. At a show. Yup. OH HOW THE TABLES HAVE TURNED. Does he really belong in the hunter ring yet? No. I mean look at that sloppy knee action. But here's something to consider, which is how stupidly relaxed he is. He doesn't even think about refusing things. He half-halts. His tempo is becoming steadier all the way around the course. And he acted like an old pro. 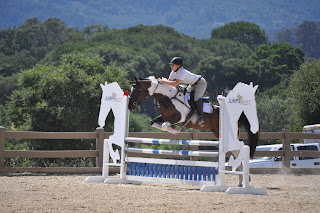 Kat and I stepped into the 1.0m ring for the first time and she performed like she always does, with her heart totally in it and her focus 100%. We pulled a rail when I for some reason decided we should jump out from underneath a vertical, but otherwise she jumped hard and well. I'm looking forward to the next time.

We only jumped on the schooling day, where you earned a blue ribbon if you didn't knock any fences down and you remembered your course (how else do you think Tango has collected seven blue ribbons in two shows and eight trips in the ring? hahaha) but I think both of them are more than ready to be performing against other horses. 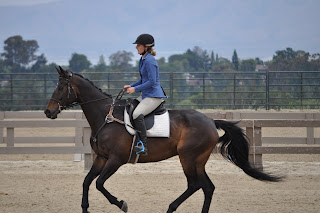 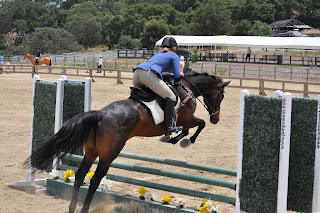 Have some more photos of Tango because I think he's the cutest thoroughbred. and I love him.