Phases of a Jump: An Overview

There are five phases to the horse's jump. The approach, the take-off, the flight, the descent, and the getaway. I will illustrate each phase, and delve into a more detailed discussion of both horse and rider biomechanics at a later time.

Okay, great! Now what? What do I do with that?

Improve the gait BEFORE the transition, of course!

And this is our eternal question. This is one of my favorite topics because of my obsession with kinematic abnormalities but I'm going to try to stay on track a little longer here. 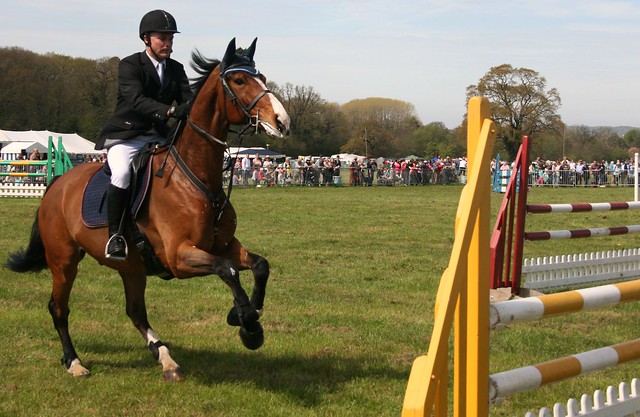 The approach needs to be a relatively organized, forward-flowing canter. The hindquarters need to be active, with the hind end reaching well under the horse in order to provide the maximum power for the flight of the jump. This is why a common suggestion is to ride the long side of a dressage arena as if we're aiming for a 4' oxer at the end. Any jumper knows how silly it would be to ride at a jump while being strung out and disorganized...

The approach is often characterized by the horse either shortening or lengthening his strides in order to actually get himself over the jump - how much as a rider we encourage this is determined by which arena we're in. Show jumping? Hell yeah we encourage the horse to lengthen! As long as his feet can reach under his belly and subsequently under us, we'll encourage the horse forward! The hunters? Oh no no no keep your stride perfectly the same and measure it until that same stride length carries us to the perfect takeoff point? Stadium jumping? Our horses have to take care of us out on the cross country field and while I want to take over and pilot anytime I want, I also want my horse to know where his feet are well enough to assess the jump and get himself over it.

The horse's shoulders take off before the hindquarters gather to launch the horse forward, which is why is it SO IMPORTANT NOT TO JUMP AHEAD OF YOUR HORSE. If you jump ahead, you disturb the horse's balance and essentially trap the forelegs on the ground, rather than waiting for the powerful push from behind to fold you down over the horse.

You have to wait way longer than you think, you know.

Using my dressage-reference earlier, the flight (also referred to as the phase of suspension), is the "transition." All the work up to this point determines the quality of this transition from the front of the fence to the back of the fence, and the quality of our flight is going to impact how we land.

For many riders, the flight is a moment of blackness, a breath of freedom, and a silent beat in the air. For those who work towards it or just have jumps about ten million jumps, they can feel the horse well enough to know how well the horse is using his back, which lead the horse will land on; they can use this moment to plan their arc and to see the next thing they'll need to do to prepare their horse. There's a whole psychological analysis involved in teaching a rider to think while jumping, so I should bookmark that as a topic for another day.

Once again, the shoulders have a whole lotta stuff to do in the descent. They land and take off again before the hindquarters have come down, withstanding an incredible amount of force and yet retaining their agility. Horses are incredible, amazing athletes.

On a total side-note, it is remarkably difficult to find photos of the getaway because of how absurdly un-photogenic it is. The horse's weight is thrown forward, they're struggling to get their feet underneath them again, and their balance is wonky. This is why it's important to treat the getaway as an important rebalancing moment -- don't allow the horse to rush onward, hindquarters trailing out, else you risk pulling rails on your very next jump.

The getaway is actually the BIGGEST reason grids are such a powerful teaching force. Through no imput of the rider at all, the horse has to get his poop in a group and learn to very quickly rebalance and get his hindquarters under him. It's also why bounces are so very good for shoulder-strength; the horse has to provide an extra-powerful push in order to make room for the hindquarters to tuck under to take off again.

So that's my overview of the phases of a jump -- keep your eye out for a more detailed analysis of each phase at a later point!
Posted by Kate at 9:00 AM