One week in, three trainers later

A few rides later, and I was still struggling somewhat to get a handle on Moxie, but definitely starting to feel better. 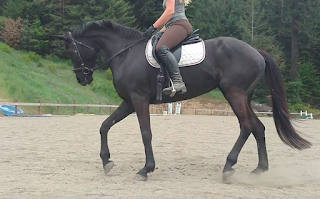 Megan came out to help me first. She watched me ride her around, she might even have gotten on her, I can't quite remember now. There were some big things that we worked on, and it turns out I pretty much just needed to take that lesson about sixty times. 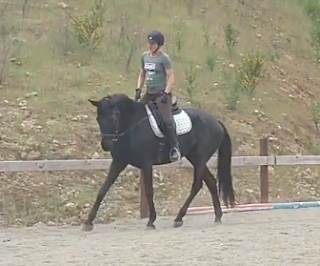 There's a trainer in the east bay that I've helped off and on for a year or so - it started because I'd often told her I'll sit on anything, so she had me ride some particularly challenging thoroughbreds and give me lessons in exchange. It works out really well for both of us. She's a silver medalist and pony clubber who has evented through preliminary, and she comes at a lot of the work with a really unique foundation of groundwork, so I learn a ton from her. I texted her pretty much straight away and asked if I could bring Moxie to her for a lesson. 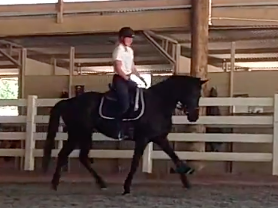 The arena at A's barn is a little bit spooky to my senses, and bringing Moxie there showed me one of the best things about this mare: she pretty much unloads anywhere and asks, "what are we up to today?" In all the places I rode her, there was only one arena she struggled to settle in.


The biggest takeaways from this lesson were:


Not one to give up at TWO trainers in one week, I scheduled a lesson three days later with a new-to-me trainer that a vet friend had recommended. "She's life-changing," my friend told me, "she'll just change one little thing and you'll wonder how you ever made it through before."

This trainer has a pretty good track record of producing students, and she has an energy that is astonishing. She is wildly positive and encouraging, saying such things to me as, "I'll make you sit like a queen," and "oh, that's easy. You just look over there and voila! That's a leg yield."

She makes dressage feel infinitely conquerable. I did end up riding with her again on my journey with Moxie, but this was the only lesson I had for a long time with her due to scheduling challenges.

She told me, flat out, that Moxie was not on the bit at all. That I needed to get through to her, put her in a lower place. She had me do some mild counter flexion in the canter, coupled with leg yielding the canter to get her more flexible. She told me to move my arms in the canter as if I were the one moving her head up and down.

After this whirlwind of lessons, I had some pretty good exercises in my toolkit, along with a better view of what I needed to be doing to help improve Moxie. I'd determined that of the three saddles I'd shown trainers, none of them worked all that well, but I did find one that was the best for the time being.

In full disclosure, the photos shared at the top of the post were actually pulled from a video taken a week and a half AFTER all these lessons.
Posted by Kate at 10:30 AM 4 comments:

Back to the beginning

When this post gets published, I will probably be packing Moxie's things up, putting her in the trailer, and taking her back to meet her owner. It has been the craziest of years with this wonderful horse, and I've learned so much with her.

I've struggled to write much about her over this year, not for lack of things to say, but because I didn't want her owner to feel like I was maligning her in any way. The mare is quirky as hell, and I took a few dozen lessons on the basics, but the reality is that none of what was accomplished could have happened without everything Moxie knew how to do before she came to me.

It's a cool story though, with lots of scraps of notes taken from various trainers, plenty of adventures, a bunch of shows, and levels climbed! Now that she's going home again, I feel a bit more comfortable sharing the struggles and growth we went through. All that said, let me set the stage for the beginning of our relationship. 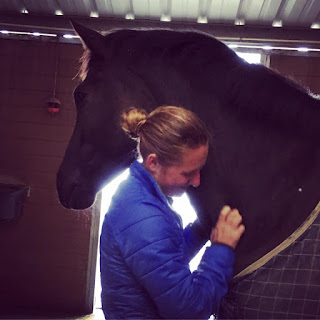 When her owner pulled in, it was pouring rain. We'd had one of the wettest winters in recent history, so while it wasn't surprising that it was raining, it did make the tour of my mountainous farm a bit more challenging.

My mom had come from Michigan to spend mother's day with me, her first solo trip to visit me in the four years I'd lived out in California. She's never been much for horses, but she later told me that when we led Moxie past my car, she could see how special a horse she was.

Mom and I had lots of adventuring to do, so I didn't get the opportunity to ride Moxie those first few days but the excitement kept rising and rising until my baby sister begged for a photo of Mom riding a horse, so I took my chances. I talked my mom into coming to the barn for a little while and riding, so of course, I put her on Moxie.


She told me I should get on and show off a little after she'd ridden, and since that had been my plot all along, I swung my leg over and within two 20-meter circles realized I had no idea how to ride this horse.

She lurched through her transitions and left me behind every time, even though I thought I was bearing down enough to stay with her. I couldn't quite ride her onto the bit, and instead felt like I was just pulling at her face. The canter swerved to and fro as if I had far too finely tuned steering and absolutely no way to manage it. I got off pretty quickly and took her back to the barn, feeling pretty demoralized. What had I gotten myself into with this horse I couldn't even steer? How was I supposed to accomplish anything with her?

I pretty quickly scheduled several lessons, the results of which I worked on for over a year...
Posted by Kate at 9:32 AM 12 comments: