Not allowed to change

On the first day of the Mary Wanless Workshop, there were three groups of three riders - I rode in the first group and had no idea what to expect.

Leading up to this workshop, I had a fair amount of anxiety. I learned that I was going to be a demonstration rider on Tuesday -- the clinic started on Friday! And reading through the list of attendees, there were some pretty powerful riders coming here to learn.

I may or may not have sent Megan a text about irreversibly ruining Moxie's mane when I pulled it (spoiler alert, it was fine), stayed up way too late staring at the ceiling and imagining worst-case scenarios, and other fun, anxious games throughout the week. 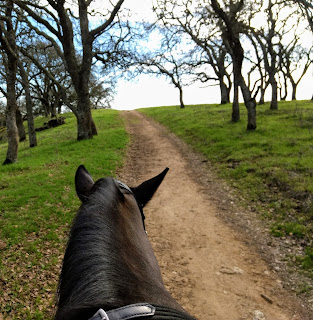 Friday morning, after a few hours of theory, my Fitbit alarm buzzed and I was off - time to get my horse tacked up. My legs trembled as I slipped my feet into my boots, I leaned into Moxie's shoulder and took several long moments to breathe, and hiked her up to the main arena where the crowd was restructuring for the riding portion. Moxie promptly spooked at someone moving a dressage letter, so I decided to walk around the edge of the arena for a few minutes until her nerves settled down.

After mounting up and walking a few laps, Mary shared the rule of the first day: we the riders were not allowed to make ANY CHANGES until we were given permission.

We introduced ourselves, I explained that I'm an event trainer aimed at second level and beyond. Mary asked me what I would change if she could wave a magic wand and fix one of my problems. I thought for a moment and told her that I would be able to sit the trot without chasing Moxie's back out from under me and that my frontline would be less overpowered by my back in the canter.

Out and walking around, Mary asked a super important question that I often forget to consciously ask myself, "Is everyone safe?" It's very British Horse Society and I know I consider it, but reminding myself to keep that at the forefront of my mind in the beginning of a new lesson with a new client is a good thing.

Next, she mused about where we would land if the horse were to disappear out from underneath us: on our feet, on our butts, or on our faces? I would land on my butt.

Quite a few things were lobbed at me in the walk: I have a good shoulder-hip line, but lose it to my feet. There appears to be a bit of a layer of shifting sand in my waist, my shoulders are very involved in the walk. I tend to round my shoulders. The front of my body is a bit soggy. The "cereal box" of my torso is bloopy. My right foot leads, especially when changing directions. 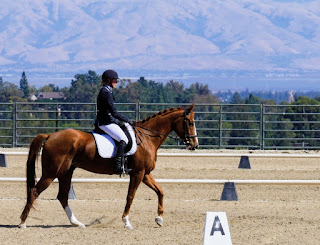 It is very difficult not to change when people start commenting on things that aren't quite right about your riding. Some things I know how to fix easily and really need to be more stern with myself about correcting on the daily. Some of these things were new ideas, new words, new challenges.

I hear Mary say, "and now we're about to ask the cruelest question, and keep in mind you're not allowed to change yet, riders..." 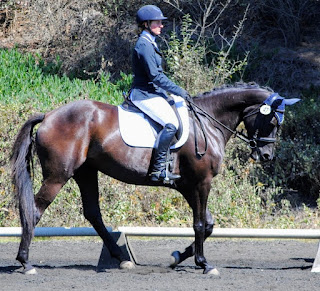 It really is amazing how when you focus on things in your body they seem to want to change, and my right foot seemed to have lost all stability to speak of as I focused on keeping it still, in the wrong spot.

"If the skin of the rider were a bag, what material would be bag be filled with?"

The answers ranged in hilarity from 'somewhat gelatinous' to Mary's 'blancmange' to 'mochi'.

And then we moved on to trot. Mostly, the impression I gave at the trot was significantly better, with someone being quoted as saying, "she starts to get her shit together in the trot." 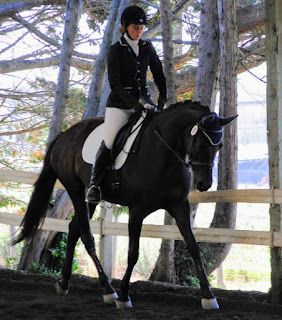 Next, we cantered, and some feedback included having my feet too far forward and my shoulder moved backward in the downbeat of the canter.

I felt a lot better about being in motion, but the sheer amount of "things" that had been lobbed at me felt pretty overwhelming. How are you supposed to fix all this? I wondered, followed by a concern about if it was even possible. 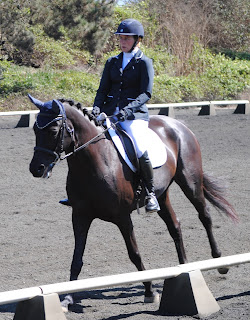 When we moved into sitting the trot, which I feel pretty competent on any horse but Moxie, I learned that there's too much wiggling, that I progressively bounce backward, and that I sit a bit left. It appears I minimize the trot in order to sit it, and that there's a wish for me to be more robust.

Phew - and then we were walking again. Except Mary was telling a story about a horse that she brought home, a big PRE stallion -- when she got him back to the stable she learned he was a bit of an amoeba, legs and balance everywhere. She related me to that horse in the walk, stating that I really needed to firm up a bit in the walk. She coached me on a few things, namely not allowing my spine to willow, then asked me:


"What would it take for you to never go back to the other way of walking?"

I didn't really know what to say. It isn't the first time I've been told to firm up my walk - there's a LOOONG post sitting in my drafts with the title "Don't be a trail rider" wherein Tracey coaches me extensively about my sogginess in the walk and I still don't really understand how to fix it. I shared that when Mary asked, that I'd heard this before, and someone in the crowd said, "I trail ride, and I don't walk like THAT!" It was meant to be funny, but it definitely stung.

The feeling of being posed that question was a little shameful; there's this ugly thing in my riding that I've shrugged and ignored all this time to the detriment of my horse and my riding... It was an unpleasant feeling, and I choked back a lot of emotion while I considered it. 'Maybe I'm just not good at walking,' I told myself as I focused on pressing my guts against my muscles and keeping my alien right leg in line.


At the end, we lined up in front of the audience and Mary reminded us that we are more than a collection of patterns and bad habits and that a rosebud is worth no less than a rose. Later in the weekend, we spent a lot of time talking about mindsets that affect success. One type of mindset says, "talent: you've either got it or you don't." And another mindset says, "the harder I work, the better I get."

Mary emphatically coaches in a way that proves "the harder I work, the better I get." I left the arena trying to remember that, but still feeling pretty dismal. Bear with me though, as my mood begins to change about all these challenges soon!
Posted by Kate at 8:02 AM